Corktown's Landmark Train Station... and the Detroiter Who Embodies Its Spirit – The Michigan Pedaler
We're open for booking and rides! Your health & safety are our primary focus, here's what we're doing about it: View Plan Details 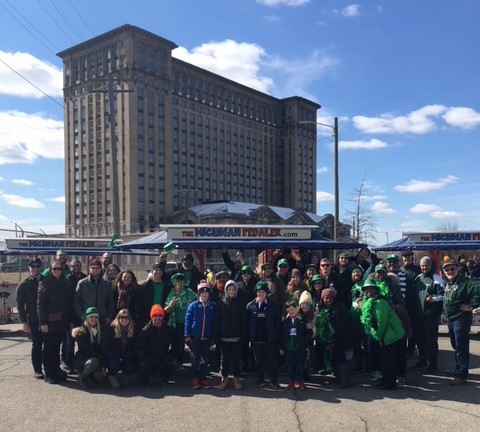 For years, the Michigan Central Station has been the focal point for pictures in Corktown, including those by riders of The Michigan Pedaler

This weekend, Ford Motor Company hosts an Open House at the Michigan Central Station, the hulking structure that dominates the Corktown skyline.

As Ford made its celebrated announcement on Tuesday, my thoughts kept returning to another visit I made and the man who took me there.

The Michigan Central Station building draws you to it.  It did it for real until 1988 when trains pulled in from across our country to deliver people to and from Detroit.  As it fell into decline, it drew you to it in the way where you looked at it even though you thought you shouldn’t – kind of like driving by an accident on the freeway. 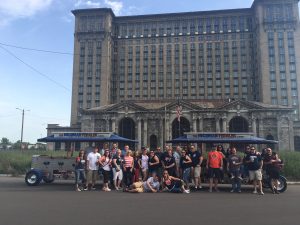 I never rode a train into the station. I never set foot inside the station when it was open.  But I remember gazing at the structure in the distance from the top rows of the bleachers at Tiger Stadium, which sat at Michigan and Trumbull, a few blocks from it. An amazing view accompanied any trip into Corktown.

What lurked behind the walls and the façade?

It proved to always be a lesson in curiosity and wonder.  As it sat empty and you heard people talk about demolition, your imagination ran with “what ifs” or “what could be.”

Meet John,  a Detroiter through and through

“Hey, you wanna grab lunch,” said an old, somewhat raspy voice on the other end of the line. It was my friend John.  He was in his late 60s, early 70s.  I had known him for years and it felt good to catch up.

Now, you have to understand John.  Beyond his 1950s-era brush cut, he has the heart of gold, a mischievous smile that is matched by his one liners. He’s rough on the edges – potentially crass — but quickly wins over all.

John raised a family of nine in Detroit, near Grand River and Southfield. He always had special time and a soft spot for his special-needs son who tailed him everywhere, teased him, and looked up to him in a totally loving way.  Every Sunday, John would sit in the front row of St. Mary’s of Redford even though he was never baptized Catholic. It’s just what he expected of himself to be a good husband, dutiful family man and role model. He served overseas for the United States in the Armed Forces and worked his career as a boiler operator for Detroit Edison (now DTE Energy), proud of his job and talented in his trade.

John could hold his own in conversation with anyone, and always had a story about whatever the topic that usually ended with the crowd laughing uncontrollably at his final one-liner. Once, I witnessed John sit in an old-school metal folding chair in his backyard.  It was the day after his son’s high school graduation party.  He started making a point and needed to move both hands to add color to the story.  He set his can of beer right on his shirtless, significantly protruding belly, then gyrated as necessary while the beer remained perfectly balanced.  How many others can say 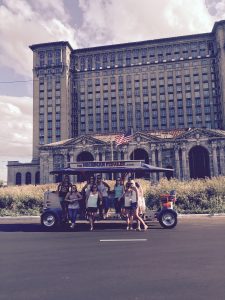 they have a body that serves as a perfect bartop?

When his neighborhood began changing in the 1970s, John never swayed.  He wasn’t about to leave because the color of his neighbors’ skin looked darker.  He always saw people for who they were versus how they looked.

He loved his city. He loved its history. He loved exploring. He loved raising a bit of trouble.

“Meet me at Nemos,” he continued over the phone.  “We’ll grab a hamburger.”

A Trip to the Station

Over the course of our lunch, we chatted about all the usual.  And then the subject turned to the train station.  We talked about its demise, its potential and what would ever come of it.

“You wanna go inside?”  John asked.

I weighed the offer and thought this might be my only chance before it would be torn down.

And so we drove down to the station, the elder leading the younger. He knew exactly how to navigate. He pushed through some fencing, weaved around a few other obstructions and we were in.

He burst with confidence.

We made our way into the main building. I shot my eyes toward the ceiling. I stared at the walls. I looked at the floor.  I turned the corner and embraced the view from a different direction.

We never made it past the first floor. We never climbed the stairs. The majesty of that first floor – where thousands of people crossed paths every day to and from Detroit on a train – could be seen.  But its complete grandeur hid behind spray paint and bad graffiti, weather damage and the passage of time.  The floors were filled with rubbish, empty liquor bottles, plaster, needles and more.

I can honestly say that with every corner turned, I expected to see a dead body, a drug user, or someone else just hanging without good intentions. My concerns outweighed the inherent beauty I witnessed.

With no cameras on cell phones those days, the unplanned trip came without any photographic proof — but it left an indelible imprint on my memory.

Remembering John and The Station

When I hear talk about the resilience of the train station, it always brings back memories of John and that walk through the iconic old station.

This weekend, thousands will be welcomed back.  They won’t have to push through fencing to get in.  They won’t simply be on the outside gazing in – wondering what the inside looks like —  as the thousands of Michigan Pedaler riders we’ve taken by for a picture have done on our Corktown tour for three summers.

John passed away a few years ago. He’s not able to witness what is happening today. 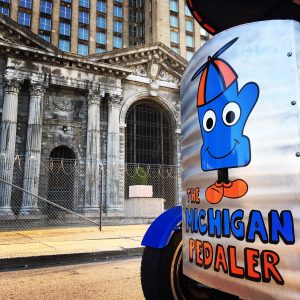 But you can say he and the train station share many of the same traits.

They both fought. They toiled. They stayed loyal. They lived the good times and the bad times. They may be a bit rough around the edges but the insides remain pure gold.  They both always stood tall – fiercly proud of Detroit.

Both are embodiments of this city’s collective soul.

John lived those values for many to see.  Thank you, Mr. Ford and Ford Motor Company for turning those “what ifs” and “what could bes” into a reality for a building that stands for so much more in this city’s history.