One of the great things about working at The Michigan Pedaler is the chance to show out-of-towners a good time while showing them the sights of The Motor City.

On a recent weekday afternoon, we were required to act fast.

A phone call came into our office asking if in 120 minutes, it would be possible to have two bikes take a group of people visiting Detroit out for a ride on Detroit’s Party Bike. While our policy is that we need 24-hour notice, if we can make something happen on short notice, we like to take on the challenge. 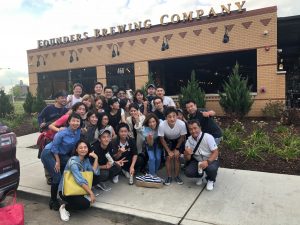 There was a bit of a language barrier but both sides ended up on the same page. A couple hours later, we met our group to learn that there were 28 guests boarding from Tokyo! They were in town as part of a worldwide convention for their employer and were excited to have some fun on their last night in Detroit.

Most of the group spoke some English and a few were fluent. One driver often used a Google translator on his phone to better communicate some phrases. Still, there were fun moments that we could laugh at afterwards. Sometimes, our drivers had to even clarify “that was a joke” after witty banter, which always led to a bigger laugh than the initial zinger.

As we hit one of the small hills in the city, the driver told everyone to put their hands up because we were about to head down a hill. People looked confuse

d. “Roller coaster,” the driver announced.  Immediately, smiles took over everyone’s face. They began laughing and talking loudly. As they hit the hill, they all raised their hands and cheered.

In many ways though, the ride was no different than what normally occurs day-after-day on The Michigan Pedaler. The music played is exactly what is played every weekend on bachelorette parties or as neighborhood groups pedal through town. The dancing in the aisle, the laughing and sight-seeing all were the same – it’s just that these guests live 6,403 miles from Detroit.

The group loved spending time at Founders Brewing and spent a great deal of time photographing themselves in front of the mural on the building’s side. They looked around in awe as we cruised down Woodward Avenue and saw the sights including Little Caesars Arena, Comerica Park, The Fox Theatre, Little Caesars Headquarters, the Hudson’s site and Campus Martius. 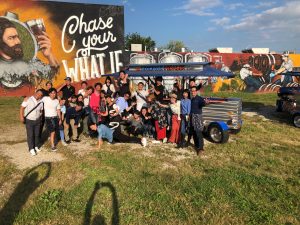 As our visitors saw parts of Detroit that they had not seen in their first four days in here, we witnessed the excitement and curiousity of what they viewed. We explained parts of Detroit, its renaissance, and its future to them.

As the ride ended, the group sought dinner suggestions from our drivers as this would be their final dinner in The Motor City. This turned into our driver joining them!

We wanted to thank this group not only for visiting The Michigan Pedaler, but visiting Detroit! It’s global tourism like this that we look forward to seeing more and more of as Detroit continues its development and upward trend!